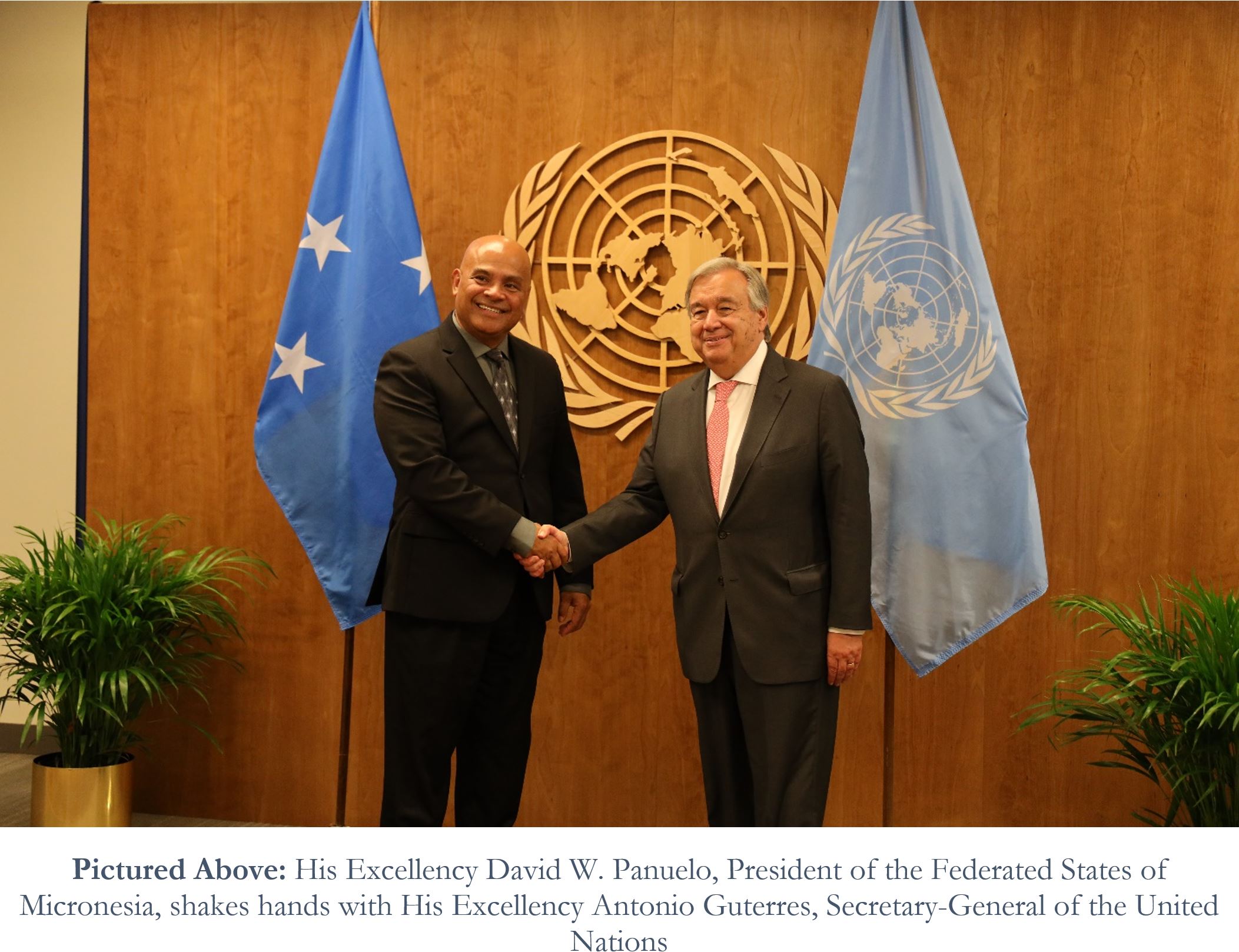 NEW YORK, New York—On the margins of the 74th United Nations General Assembly (UNGA) and the Climate Action Summit on September 23rd 2019, His Excellency David W. Panuelo, President of the Federated States of Micronesia (FSM), was received by His Excellency Antonio Guterres, Secretary-General of the United Nations (UN). The purpose of the meeting was to reemphasize the total solidarity between the FSM and the UN, and to discuss the upcoming Northern Pacific Multi-Country Office (MCO) to be hosted in the FSM.

The meeting began with Secretary-General Guterres highlighting the UN’s complete and total commitment to reversing the negative trend of climate change, which—along with protecting the ocean—is very high on the UN’s agenda. The Secretary-General made it exceptionally clear that the UN is a friend to the FSM, committed to solidarity and support.

“Thank you so much, Secretary-General Guterres, and your team. I don’t know where you get the energy from, but I watch you all day working and from morning until now you still look fresh!” President Panuelo began. “On behalf of our delegation and our Government of the FSM, we thank you.”

“[While flying to the Pacific Islands Forum] I read the Time Magazine and learned more about the work that you’ve done, and on behalf of our Government and the Pacific…we thank you for being a champion for [tackling] climate change. I know it’s a tough job and a big challenge, but being together…we can reverse the trend [of climate change],” the President continued.

The discussion then turned to the upcoming Northern Pacific MCO, of which some citizens may rightly inquire: what is an MCO?

For numerous reasons—logistics and finances among them—the UN maintains MCOs in several countries which, for the purpose of UN programming, act as regional headquarters. The MCO presently based in the Republic of Fiji serves as the hub for servicing ten countries in the Pacific, including all five sovereign nations in the Micronesian subregion.

“I thank you [Secretary-General] for all your efforts in helping the Pacific and [the Micronesian subregion]. I know it’s been a long effort for many people…so I think the focus [of the Northern Pacific MCO] will be directed to the five independent countries [of Micronesia], and so…my deep thanks to you for your foresight; thank you for that,” President Panuelo said.

Secretary-General Guterres again reiterated that the FSM can count on the UN for its solidarity and sincere partnership, noting that with upcoming conferences on oceans and biodiversity that there are many opportunities to accomplish great things for the people of the FSM and the world at large.

The FSM National Government extends to all nations what it seeks from each: peace, cooperation, friendship, and love in our common humanity. The Nation recognizes that the UN fundamentally exists to promote and protect these same values, and the FSM is proud to call the UN its partner, ally, and friend in tackling global challenges like climate change and in promoting the ideals of human rights, education, health, and empowerment, among others.

The 74th UNGA is the first that President Panuelo has attended in his capacity as the public servant in the highest office. While it’s common practice and protocol for leaders to call on the Secretary-General, it is also a distinct honor and privilege to be afforded the opportunity. The FSM National Government is grateful that it has such a close relationship with the UN and the broader global community, and aspires to strengthen these relationships further.

We have 317 guests and no members online